The Greatest Show on Earth

I just finished reading The Greatest Show on Earth, by Richard Dawkins.This is Dawkins latest book in which he outlines the evidence for evolution. When you hear this, you might think that
a) Hasn't he done this before? and
b) Surely this is a done deal, why is he banging on about it?
To answer a), previously he has outlined the how of evolution (Climbing Mount Improbable), why evolution is a better fit to explain history than God (The Blind Watchmaker), and some books about how genes work (The Selfish Gene and The Extended Phenotype) but this one goes through the existing evidence for evolution being actually true, whereas in the other books it is taken as an assumption.
To answer b), and he covers this in depth, that in particular in the USA, around 40% of people don't believe in evolution at all, and even in many other Western countries it can be around 20%. That is unnerving.
So if you are interested in how we know that evolution actually occurred, this book takes you through in usual Dawkins glorious detail what the evidence actually is, and that it doesn't all hinge on a few fossils. I was quite interested to go through the whole Missing Link counter argument and see that there just aren't any, and that we actually have a really good fossil-record coverage.
Some of the arguments against the Intelligent Design theory are quite amusing. I was fascinated to learn about a particular laryngeal nerve (brain to larynx) that in all mammals, runs from the brain, wraps round near the heart and goes back up the neck to the larynx. There's a good evolutionary explanation for why this is so, but if you attributed it to a designer, it would be more a case of Unbelieveably Stupid Design. Think Giraffe.
Then there is the decade long experiment showing some bacteria actually evolving, showing them becoming more efficient at consuming glucose, and even evolving the ability to consume a citrate for energy in restricted resource conditions. Amazing stuff.
I'll admit that I did speed read and skip over some sections, because he's really preaching to the converted, but to get into actual detail about things like the above, and radioactive clocks, carbon dating etc was really interesting.
Posted by Owen Roberts at 19:02 1 comment:

We have an open water drain that runs under the house, and as a result the garage and rumpus room can get quite damp and musty as the ventilation isn't very good. To rectify this, step one was to fix the open drain by replacing the old loose terracotta drain segments with 10cm Ag pipe, then covering the lot with a ton of blue metal. My poor programmers hands suffered, but I felt good about it afterwards.
Pictures! 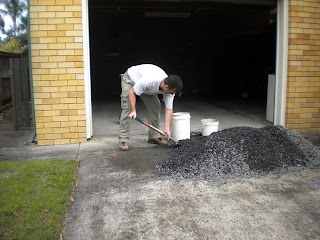 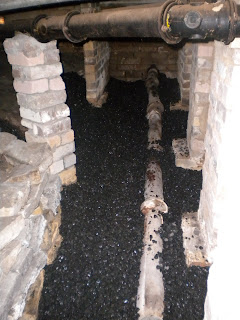 Posted by Owen Roberts at 14:58 No comments: