Cooool. Just watched Cloverfield. Blair Witch meets War of the Worlds. Stylistically like Blair Witch with the whole thing filmed from a consumer video camera, the content of a monster rampage in New York. Really nothing new, but damn, it was gripping. Some of it reminded me of playing the Doom PC game. I don't think it was particularly scary, well not popping out of your seat scary, but once it gets going, and it takes a few minutes, it just doesn't stop. Cooool.
Posted by Owen Roberts at 21:59 No comments:

I've been playing some old Amiga 500 games recently, emulated on my PC. In particular, I've been playing The Faery Tale. It's so cool. OK, maybe it's mostly cool because I played this for weeks and weeks non stop in 1987 or thereabouts when it was fresh. 20 years ago, this game was state of the art. The graphics and sound were awesome, the RPG element quite good, certainly new at the time. The sheer scale of the game world unbelieveable. Today, ok, the graphics are a little blocky to say the least, but I can still whistle along to the sound track although you can count the number of sound channels. My son has quite taken to it and is happy to sit next to me playing it for hours. 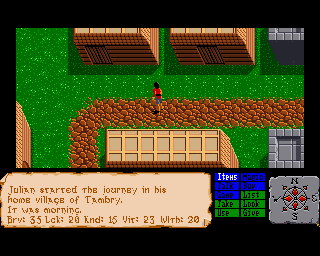 "Julian was getting hungry."
"Julian was starving!"
heh. The game is still challenging to start. Just surviving is hard work. But then you get the turtle, and a cheat in the game that lets you attack your friendly ride, increases your Bravery points, and you become nearly invincible. Which is lucky really, because the rest of the game requires a lot of exploration where you can't afford to die. I'm going to try not to cheat too much otherwise. Damn, this is fun. Next I'll get Elite. That was awesome too.
Posted by Owen Roberts at 20:40 No comments:

Cool. There are new BSG webisodes "The Face of the Enemy" available which continue from the end of series 4. They are on scifi.com, but you're better off going and getting a real download from torrent somewhere. Thanks to Hugh for the tip-off!
Posted by Owen Roberts at 20:29 No comments:

Email ThisBlogThis!Share to TwitterShare to FacebookShare to Pinterest
Labels: science-fiction

Wooh! Back online. Haven't had a great month, but all's well for Christmas, and been doing some serious chilling. I've been getting some good solid hammock time the last two days just reading. And to use a simple term, that's been very very nice. Christmas has been the usual fun crazy family time, we had Christmas Eve with the Roberts clan at our place, and went to my Dad's place on Christmas Day. Lots of seafood, totally delicious. Sinead's Mum and Dad are over from Ireland, and they are having a blast out here in the warm sunshine. Their first non-cold Christmas - crazy concepts!
I'm taking all of next week off from work, and damn, I'm just going to enjoy doing very little. Working hard on getting my stress levels waaaay down. Gotta start looking for another job in say, mid January, as I'm out of Websense latest end of March, but that is for later.
Going to do Palm Beach followed by the Newport Arms with Sinead's oldies tomorrow. That's always good.
Posted by Owen Roberts at 19:59 No comments: